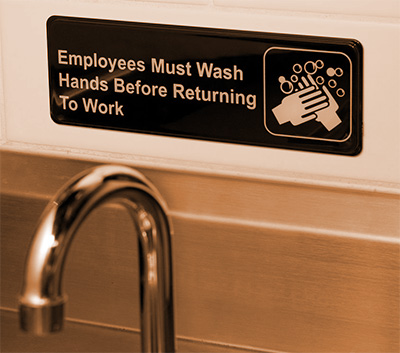 SPOILER ALERT: this was originally posted on April Fool’s Day. It’s intended to be a parody.

Last year, a chain of high-end Maldivian steakhouses, which will remain nameless for reasons that will soon become obvious, came to us with a specific training problem: employees were not washing their hands in the restroom before returning to work. The chain had been grappling with this performance gap for a number of years and had invested significant budget in a series of attempts to resolve it.

At the point we were brought in, they were currently sending all their new employees to a three-day off-site instructor-led session — a kind of hand-washing boot camp that ran, after transportation and accommodation costs were factored in, an average of $3000 per trainee. Company-wide, this meant they were spending roughly $1.5 million annually on just hand-washing training alone. This may seem an exorbitant price-tag for training on such a specific behavior, but, for the client, it was money well-spent.  First of all, because. . . gross, and second, because this sum was actually dwarfed in comparison to the expense of the numerous lawsuits filed by nauseated patrons, to say nothing of the collateral costs of lost business from all the negative publicity surrounding the litigation.

Our mandate was to find a way to cut these costs while raising the level of compliance with the hand-washing rule. We conducted several months of needs-analysis, a process which entailed hiring a number of motivational research firms, business psychologists, and operational efficiency experts. We also engaged a cutting-edge neuropsychology team from Stanford to create MRI brain maps of employees at every stage of the going-to-the-bathroom process, in hopes of using those insights to determine the most effective point of remedial intervention.

To be honest, we did find ourselves going down a couple of unproductive paths after the initial discovery phase. Our first solution involved an immersive VR simulation, in which employees would don reasonably priced goggles (only $250 per employee per restaurant) and experience actually going to the bathroom in a digitally-recreated environment. While this approach did have the desired effect of creating a safe training space where mistakes could be made and remediated in an engaging and fun way, we did find that it raised other issues around workplace hygiene and uniform cleanliness.

Our second attempt was to use a combination of AR and QR codes in the bathroom itself. Essentially, employees would take their mobile devices into the bathroom with them and use the QR reader that the IT team had pre-installed on those devices to scan a custom code above the sink. They would then see a Pokémon-like character washing its paws, according to mandated procedure, inside an augmented reality view of the sink itself. After about half-a-dozen of the company-purchased devices had fallen into the sink and/or toilet during the pilot, we decided to explore other options.

After going back to the drawing board once more, our lead designer had a sudden brainstorm one morning in the bathroom (of all places) as he was reading an online article about the microlearning strategies. What if the correct solution had been in front of us the whole time? Bite-sized content, delivered just-in-time, precisely targeted, and geared towards the famously short-attention spans of the millennial learner — the answer was so obvious! All we had to do was attach an iPad to the wall above the sink, displaying a simple message about the importance of washing your hands before returning to work.

It was actually a dishwasher at one of the pilot restaurants who suggested that perhaps we didn’t even need the iPad at all to display the training content. We initially dismissed the idea as charmingly naive, but as we turned over the idea in our heads over the next several months, we began to think, what if…? To our great surprise and delight, we discovered that there were a number of restaurant supply stores that actually sold placards with some variation of the very message we needed to convey. Our microlearning strategy was back on track, and our clients were overjoyed that their 300K investment in our services had resulted in such a cost-saving solution.

Currently, we are in phase two of our year-long pilot for this admittedly radical new solution, and we have yet to conduct our level-four Kirkpatrick evaluation study of its efficacy. However, hopes are running high, and we have already seen a complete lack of new lawsuits naming any of the restaurants in the pilot program. The Maldivian steakhouse chain is thrilled with the results, and we are currently in discussions with them about another training problem: how to get their cooks to reliably distinguish between the salt and the rat poison.

By the way, happy April Fool’s Day from Alex & David at Candent Learning.  🙂